HALLE BERRY: PREGNANT AT 47. DANCING WITH THEN HUSBAND – OLIVIER MARTINEZ

The fact that a woman, getting pregnant later in life does not impact birth risks – further spotlights the certainty that a mother’s age, does not matter.

Health and lifestyle choices we make, will always have a large impact on our ability to carry a healthy, full term pregnancy.

Healthy pregnancies, are not based on the popular notion that a woman’s ability to give birth, is based on her age.

Science,and technology will help us better understand our body, so we can craft a healthier lifestyle, workouts, and recovery plan before and after pregnancy.

The American Journal of Epidemiology recently published a study that stated found that – a mother’s age is not the cause of elevated risks such as preterm labor and below-average birthweight.

UMA THURMAN: PREGNANT WITH HER THIRD CHILD AT AGE – 42

Researchers have credited the ability to carry and have a healthy full term pregnancy with individual circumstances in the life of the expectant mother or couple.

The lifestyle and station in the lives of parents and their behaviors, are more important than the fact that they are grown, older adults. 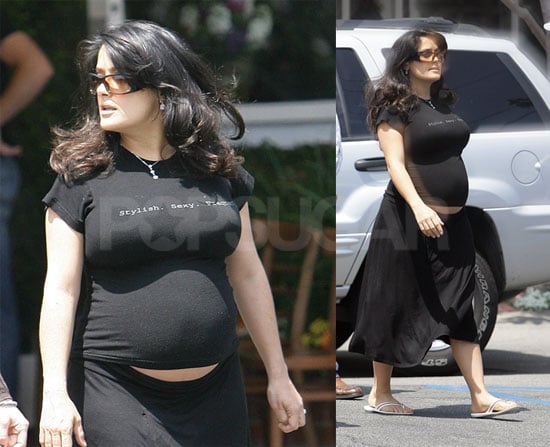 In developed countries, such as Finland and Sweden, childbearing later in life is a phenomenon which has become increasingly evident in the last three decades.

FRENCH MINISTER OF JUSTICE: RACHIDA DATI GOT PREGNANT WITH DAUGHTER ZOHRA AT AGE 46

CARLA BRUNI [PREGNANT AT 43 WITH DAUGHTER GIULIA] AND HUSBAND: THEN PRESIDENT OF FRANCE – NICOLAS  SARKOZY

In the U.S., a pregnant woman is considered to be AMA (Advanced Maternal Age) at 35, while in the U.K. she is referred to as ‘geriatric.’

IMAN GOT PREGNANT WITH DAUGHTER ALEXANDRA AT 45

“This is antiquated and total B.S.,” “It used to be that the risk of a woman at age 35 having a baby with Down syndrome (one in 350) was equivalent to the risk of her suffering a miscarriage during amniocentesis (a test that detects chromosomal abnormalities).

“This is why experts believed 35 and older to be a high risk age. Now, however, that’s completely outdated: “Thanks to technology such as guided ultrasounds, the risk of miscarriage during an amnio can be as low as one in 1000.”

“While the study didn’t define the individual circumstances that are more likely to cause birth risks, age in and of itself is not the determining factor.”

“It’s true that age definitely plays a role in fertility (it starts to sharply drop at age 35), but past performance is the best indicator. If you’ve had a healthy baby before, you should be good regardless of your age.”

PREGNANCY AND THE MIRACLE OF LIFE

one of the most important elements for avoiding complications is maintaining a healthy weight, which makes one, less likely to have gestational diabetes or preeclampsia (a dangerous condition that is always characterized by high blood pressure).

Dr. Moritz advised: “If approved by your doctor, try certain diet changes and workouts for each trimester.”

THE SIMPLE FACTS ARE:

Regular exercise and a well-balanced diet are the key to supporting a healthy pregnancy regardless of age.

JANET JACKSON GOT PREGNANT WITH HER SON : EISSA AL MANA, AT AGE 50

What do you think? Let us know your thoughts, experiences and beliefs.