Jennifer Bobbi, a top American career Tupperware sales person, has encountered overt sexism, as soon as she decided to transition from a man into a woman.

Jennifer who was born, Robert Joseph Suchan, to a large family in Long Island in 1969. She always knew she wanted to be a woman. After many years of struggle between making the decision to come out or not, years of clinical depression and a suicide attempt – at age 15, Jennifer was committed to an insane asylum.

JENNIFER BOBBI HOSTING A PARTY AS THE CHARACTER SHE PRODUCED, “AUNT BARBARA”

Four months after she left the institution, Jennifer decided to straighten her life out, and eventually graduated from college with a Performing Arts degree.

In order to support herself, she started selling Tupperware. She eventually became the best Tupperware salesperson in North America. After successfully selling Tupperware for ten years, she decided to make her decision to transition into a woman, by placing a post on Facebook. 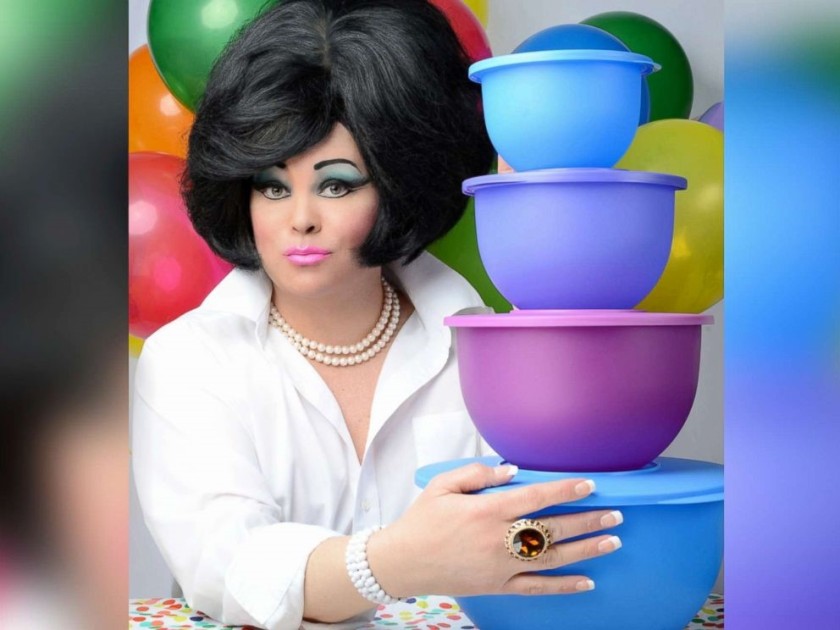 On April 2015, Jennifer made her decision to become transgender. Her sales tanked and her business suffered a major downturn. Her sales dipped overnight and she had to file for bankruptcy, move out of her home and then, into her friend, Lorraine`s home.

“I was able to have a good standard of living, and that went away, just slowly went away, little by little. Things got harder,” she said. “Eventually, I wasn’t able to pay for basic necessities”.

JENNIFER BOBBI USED TO SELL MORE THAN $2,000 WORTH OF TUPPERWARE EVERY HOUR

She also believed, her family would be more accepting of her transition but discovered that they were not capable of accepting the fact that she had decided to finally change her gender and become a woman.

“I held it inside through my teenage years into my 20s, and finally, at one point when I think my parents could not figure me out, my mother sat down with me, and she said, ‘We know that you’re gay. We know that you’re homosexual,’” Bobbi said. “What I wanted to say was, ‘Well, it’s half the story. It’s half the story because I’m attracted to men and I’m biologically and physically a male, but intuitively, mentally, organically, I’m a female. And I have been my whole life.’

Jennifer is more stunned that her family abandoned her, but cannot rationalize the hypocrisy that her former adoring clients have demonstrated, by accepting her in drag but not as a real human being with gender issues. She said;

Jennifer believes that, clients and family members love the 1960s housewife with the garish make up and brash attitude she portrayed but not the real Jennifer Bobbi.

When she was accepted as a Tupperware sales person, she produced an alter ego “Aunt Barbara”. This was a character she played, in order to entertain her clients and continue to max out $300,000.00 in sales, annually. About the loss of her Tupperware business, Jennifer added;

“It’s funny — it’s all fun and games when you’re perceived as a man dressing as a woman but you don’t want to be a woman,” she said. “But when you’re biologically a man and internally and innately you’re a woman, then it’s not so funny anymore.” “I do think that my transition was a major contributing factor to the decline in my business”. “I noticed that some people don’t understand the difference between what they perceived as a drag queen or being transgender or a cross-dresser.”

LGBTQ Advocacy groups have released data that shows that, unemployment continues to increase in the transgender population. So far government agencies have not shared the same information.

Although, society has slowly become aware of the difficulties that most people in the transgender community continue to suffer, there still is a lot of inequality in the workplace and other pertinent areas of our society.

On October 5th, Attorney General Jeff Sessions announced his decision to strip transgender individuals of protections against discrimination in the workplace under the Civil Rights Act.

In July, President Trump sent a tweet in which he stated that, “Transgender individuals will not be allowed to serve in the United States Military, in any capacity”. The Department of Defense is still reviewing this matter.

JENNIFER WAS BORN, ROBERT JOSEPH SUCHAN – HERE SHE IS AS “AUNT BARBARA”

Gonzalez Pagan, a staff attorney at an LGBTQ advocacy group – Lambda Legal said, Jennifer`s experience is the norm in the trans community. He continued;

“The paradox of being accepted and celebrated as a man in drag and rejected as a trans woman shows some of the progress that has been made and some of the shortfalls that we have encountered”. “It is important for people to understand that people of any gender can perform drag, which is viewed within the LGBTQ community as a historic art form, and while transgender individuals have long been pioneers in the field, they are not the only ones who participate”.

Jennifer Bobbi is currently working as an executive assistant at a non profit as an aide to a man with disabilities. She said, today, she earns a mere fraction of what she previously earned, before making the decision to become a fully transgendered person. In early June, her bankruptcy was discharged. She continues to act as aunt Barbara, but is most interested in pursuing a career in local theatre. She also said;