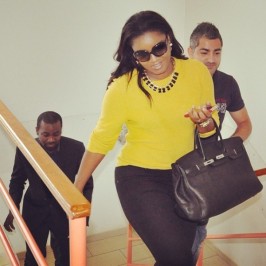 The veteran actress stated that, she has a lot of colleagues that she considers acquaintances but, refrains from getting too close, since she prefers to keep a very small, but tight close knit group of friends.

Omotola claims to live very far awy from most of her colleagues and as such does not see most of them nor does she  get herself invited to too many show biz parties.

The “Alter Ego”actress who has been married for 21years, celebrates her  daughter Mimi Ekeinde`s graduation from the University, with an Associates Of Art Degree-in Merchandise Product Development.

From all accounts, Omotola is simply trying to protect herself and family from those who obviously have an ulterior motive.